This is my front door . This is the door that our company comes through and the boys come and go through for school. I had nothing here for the first few years we lived here. The kids were not in school yet then either!

The problem that prompted adding the shelf was the fact that my oldest would come in the door from school and dump his bag and coat right inside the door. Or, worse yet, somewhere else in the house where, later, he couldn’t remember where he left it!

So, I found an old shelf that I had gotten from my mom years ago. Originally, about 9 years ago, when we lived in a different house, it was painted a dark hunter green. I’m not sure what I was thinking there, but I guess it matched the nursery at the time!

I painted it the same color as my living room walls which is about 3 shades darker than the wall it is hung on. I also painted the frame of an old window that I had swapped the panes of glass with mirrors.

I added some baskets and put together a couple boards to hold the books from the library.

I also added some hooks underneath to hold their bags and coats.

When we first moved here this half wall was a full wall, leaving the people coming in the front door in a dark hallway. I really like the opening and it allows the mirrors to reflect light from the windows.

This is what it looks like without all the coats and bags – but that isn’t my reality at this time!

I also made the chalkboard listing the things to remember on the way out the door to school! Looking at the picture, I may have to paint that a more neutral color also.

I’m not sure if the hooks are really sturdy enough to hold all these books! The blue bag is full of piano books, the dark denim bag is my oldest’s  Cadet (boys group) bag. My youngest doesn’t have school, so his bag and coats are there today. When the oldest comes home, his backpack and coat will be added! Nothing has ripped out yet!

So, it has narrowed our hallway somewhat but it has really helped in the organization and we haven’t lost our bags in awhile!

Linking  to the following…

So, I’m liking the large single numbers and initials for decorative purposes, but I haven’t been able to decide which one to do. When I saw the ampersand done – I knew that was what I wanted!

I put together a tutorial describing how I made this “twined” ampersand.

First I printed out an ampersand in a font and size I liked. I always try to remember to print it out in an outline so that I don’t waste so much ink!

Then I used a pencil and scribbled all over the back of the lines.

Then I placed it right side up on a 1/2″ piece of foam core. I have lots of little pieces around because I use foam core to make cake boards quite often.

You could use layers of cardboard also depending on how thick you want your end product.

I usually tape my original on so that if I’m interrupted I don’t have to try to realign everything! I used an ink pen to trace over the outline of the ampersand. This is what the foam core looks like after tracing.

Using a sharp – and I mean sharp! – blade in your exacto or utility knife, make multiple passes over your traced lines. I used a new blade and it definitely made life easier. Foam cuts rather chunky if your knife isn’t sharp. This is what my base ampersand looked like after cutting. (sorry – that was a really obvious observation!)  It does make quite a mess and it doesn’t come out perfectly smooth – but that will be covered up anyway.

I started on the right serif wrapping and hot gluing as I went.  Where it attached I used short individual strands long enough that the ends would be covered when I started wrapping in the other direction. I also put 3 strands at the cross points. I should’ve done four maybe, but it worked okay. But if you are doing it – make sure you have covered the whole cross point! You also notice the duct tape – well, I had to use some on the back at one of the cross points because it broke! No big deal there either though because it will be covered.

I tried a few different methods of trying to wrap the twine and at first I pulled off quite a bit and rolled it up to make it easier to place through each wrap. This worked alright, but later I determined that a shorter piece that you could just pull through each time was easier.

Here was the slow part – this took a little while, wrapping and gluing. Another thing about foam core – it is best to glue to the paper, not the foam. Hot glue just melts it. So when you start and end, do so on the paper side. I kept all my tails on the back.

Make sure that you are wrapping the inside curves tighter than the outside curves. When I got to the tight curve at the top I had to work it some to keep it from bunching up too much on the side.

I put it in my old window (still has the original paint!). I hung the basket by a ribbon and wrapped some old glass insulators that I found while doing the FJI Copy Me Challenge with some copper wire. I filled them with split peas and pine cones. I then added a twine tassel – and called it good – for now!

My husband was wondering what the peas “&” pine cones was supposed to mean?!?!??! That’s a guy for you!

I really like how it turned out. And it was pretty much free!

Linking to the following…

Hi! Thanks for stopping by. I hope you enjoy looking around and maybe even be inspired as I have been by so many of the great bloggers out there! I am a SAHM of 2 boys. I have been married to the love of my life for over 14 years. Every year gets sweeter than the last! I dabble in many things: cake decorating, DIY, home decor, sewing, crocheting, wood working, gardening and more! 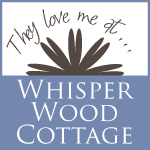